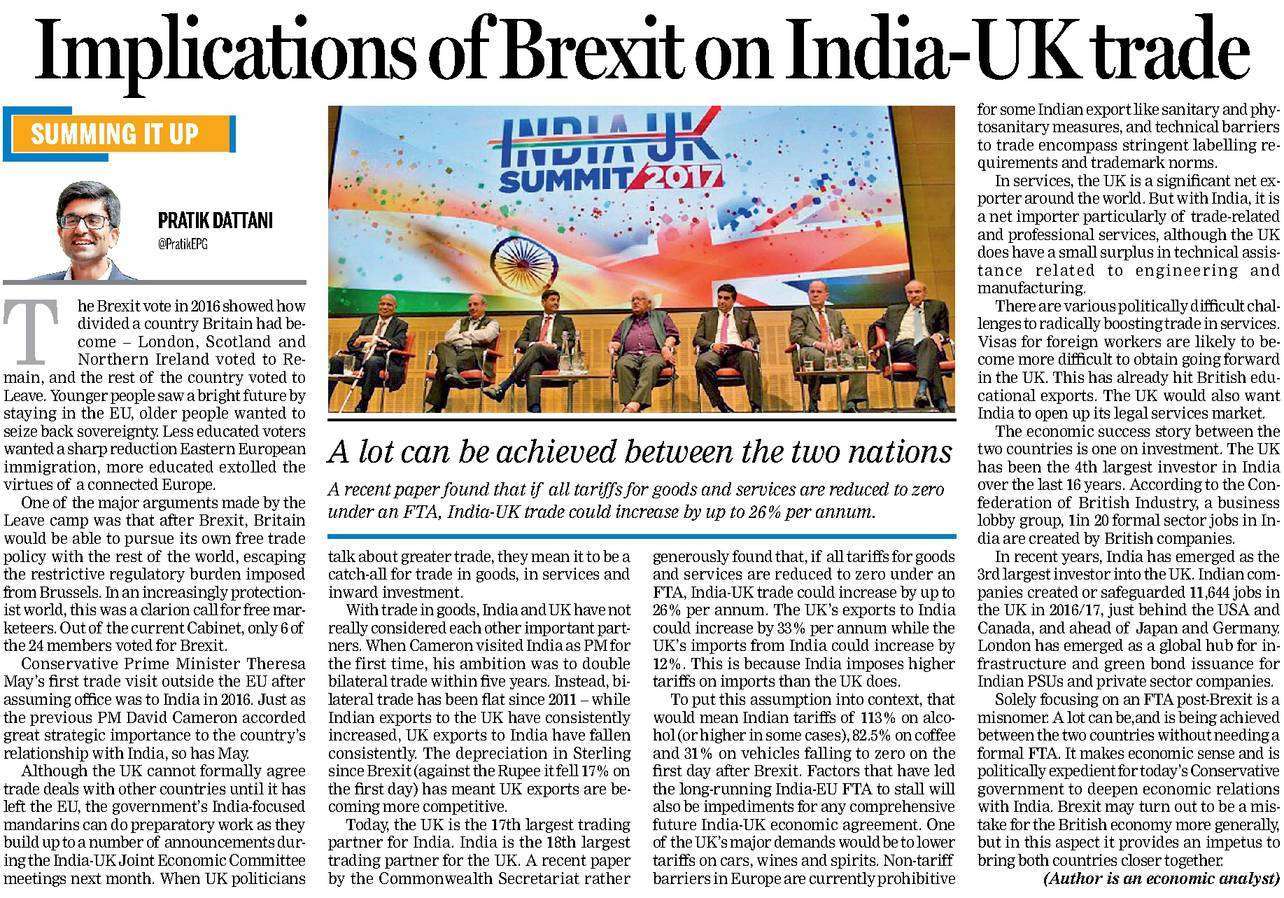 The UK is leaving Europe. A relationship that started in 1972 after a year of negotiations between the Conservative Prime Minister Edward Heath and European leaders, started its formal demise on 23 June 2016, when 51.9% of the country voted to leave.

The vote showed how divided a country Britain had become – London, Scotland and Northern Ireland voted to Remain, and the rest of the country voted to Leave. Younger people saw a bright future by staying in the EU, older people wanted to seize back sovereignty. Less educated voters wanted a sharp reduction Eastern European immigration, more educated extolled the virtues of a connected Europe. 16-18 year olds were not allowed to vote as they had in another referendum just months earlier – had they been allowed to, the Remainers would have won.

One of the major arguments made by the Leave camp was that after Brexit, Britain would be free to pursue its own free trade policy with the rest of the world, escaping the restrictive regulatory burden imposed from Brussels. In a world that was becoming increasingly protectionist, this was a clarion call for free marketeers. Out of the current Cabinet, only six of the 24 members voted for Brexit.

Conservative Prime Minister Theresa May’s first trade visit outside the EU after becoming Prime Minister was to India in 2016. In the same way that the previous PM David Cameron accorded great strategic importance to the country’s relationship with India, so has May.

Although the UK cannot formally agree trade deals with other countries until it has left the EU, the government’s India-focused mandarins can do preparatory work as they build up to a number of announcements during the India-UK Joint Economic Committee meetings next month.

It is increasingly the case that when UK politicians talk about greater trade, they mean it to be a catch-all for trade in goods, trade in services and inward investment.

When Cameron visited India as PM for the first time, his ambition was to double bilateral trade within five years. Instead, bilateral trade has been flat since 2011 – while Indian exports to the UK have consistently increased, UK exports to India have fallen consistently. The depreciation in Sterling since Brexit (against the Rupee it fell 17% on the first day) has meant UK exports are becoming more competitive, with trade so far in 2017 ticking up.

To put this assumption into context, that would mean Indian tariffs of 113% on alcohol (or higher in some cases), 82.5% on coffee and 31% on vehicles falling to zero on the first day after Brexit.

Factors that have led the long-running India-EU FTA to stall will also be impediments for any comprehensive future India-UK economic agreement. One of the UK’s major demands would be to lower tariffs on cars, wines and spirits. Non-tariff barriers in Europe are currently prohibitive for some Indian export like sanitary and phytosanitary measures, and technical barriers to trade encompass stringent labelling requirements and trademark norms.

In services, the UK is a significant net exporter around the world. But with India, it is a net importer particularly of trade-related and professional services, although the UK does have a small surplus in technical assistance related to engineering and manufacturing.

There are various politically difficult challenges to radically boosting trade in services. Visas for foreign workers are likely to become more difficult to obtain going forward in the UK. This has already significantly hit British educational exports. The UK would also want India to open up its legal services market. A glimmer of hope had emerged here last year, only to be dashed again.

The economic success story between the two countries is one on investment. The UK has been the fourth largest investor in India over the last 16 years or so. According to the Confederation of British Industry, a business lobby group, one in twenty formal sector jobs in India are created by British companies.

In recent years, India has emerged as the third largest investor into the UK. Indian companies created or safeguarded 11,644 jobs in the UK in 2016/17, just behind the USA and Canada, and ahead of Japan, France and Germany. London has emerged as a global hub for infrastructure and green bond issuance for Indian PSUs and private sector companies.

Solely focusing on an FTA post-Brexit is a misnomer. A lot can be – and is being – achieved between the two countries without needing a formal FTA. It makes economic sense and is politically expedient for today’s Conservative government to deepen economic relations with India. Brexit may turn out to be a mistake for the British economy more generally, but in this aspect it provides an impetus to bring both countries closer together.