Home Press and Blog India is at an Energy Crossroads

India is at an Energy Crossroads 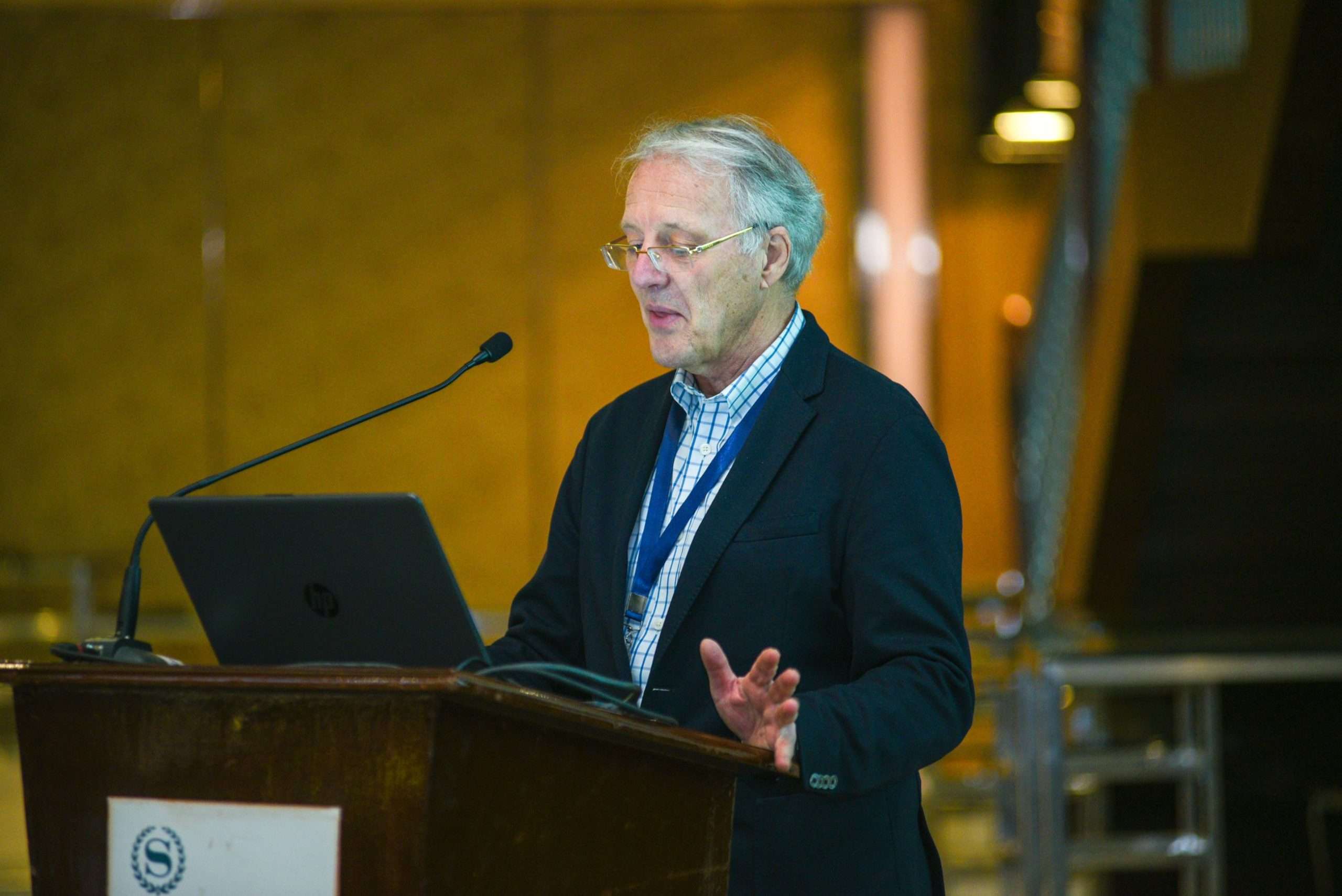 India is reliant on the Middle East for its oil and could soon be equally dependent on China for its electric vehicle revolution. The image shows Dr Chris Wright, Co-founder of British sodium ion battery company Faradion, presenting during an event in Bangalore that we organised as part of their market entry into India. Faradion was acquired by Reliance Industries on 31 December 2021 for £100m. Read our Case Study on Faradion here.

Indian media outlets have been obsessed with air pollution in the capital Delhi over the past few weeks. According to Greenpeace, 22 of the world’s 30 most polluted cities are in India.

The air pollution — not just in Delhi, but several northern Indian cities — has become a matter of public health concern nationally and internationally. Some politicians blame farmers for burning crop stubble and causing atmospheric pollution, while others point variously to cars, the lack of seasonal winds, heavy-polluting thermal plants and old trucks as the culprits.

Much of the media coverage has betrayed a lack of understanding of the issues. According to agriculture scientist M.S. Swaminathan, in southern India, stubble is not burned as there is economic value as animal feed. He advocates incentives to encourage farmers to convert rice stubble into income. But it is likely this burning contributes only 5-7% of Delhi’s problems, according to the director-general of Centre for Science and Environment (CSE), Sunita Narain.

Advocates for the odd-even car scheme in driving point to its success in bringing PM2.5 fine particulate matter levels down from the 17-times over WHO guidelines they were at in early November. But that is no long-term solution.

According to the Energy and Resources Institute, vehicle pollution is the cause of 28% of PM2.5 emissions in Delhi, of which trucks and tractors generate nine percentage points, two-wheelers seven percentage points, five from three-wheelers, and even less from cars, buses and light commercial vehicles.

To address the vehicular problem more effectively, India needs to move with its heart and soul into an e-mobility revolution. China spent nearly $60 billion on the development of this sector in the last 10 years and today has more than 275,000 electric-vehicle (EV) charging stations. Shenzhen and Shanghai individually have more than any other country in the world apart from the US. India has a measly 350. India simply doesn’t have that capital, so its solutions have to be more contextualized.

Building an integrated, end-to-end supply chain in e-mobility means a holistic approach to the procurement of raw materials, manufacturing, encouraging consumer take-up of EVs, right the way through to providing charging infrastructure and adequate recycling facilities. Anil Srivastava, principal advisor to India’s government think tank NITI Aayog, said recently that government has been the one driving this sector, not industry.

According to Kaushik Madhavan, vice president of mobility in South Asia at market research firm Frost & Sullivan, EV will be a $5 billion market in India by 2025, with batteries making up 40% of this. The market in India will be driven by two and three-wheelers rather than cars or heavier vehicles.

The focus of the government over the last year has been to bring different stakeholders together and develop a roadmap for development. There is much more to do in the coming years, including rapidly investing in charging infrastructure, continuing and perhaps expanding the FAME II subsidies and bringing down the price of EV compared to internal combustion engine (ICE) vehicles.

Government and industry seem broadly aligned on these challenges. But given batteries are a major component of the future growth path of the EV sector, this seems to be a blind spot in India. There is little discussion on this, apart from at some leading industry forums, such as Auto Tech Review. Indian public policy and related discussion lean toward lithium-ion batteries, the current global market leader and one in which the Nobel Prize for Chemistry was awarded earlier this year.

And with good reason. The lithium–ion battery is the highest energy density battery technology currently in existence commercially, so it is the go-to battery if one requires a long driving range per charge. But this may not continue, leaving the growth of the sector vulnerable to global market forces.

At its core, current batteries contain materials such as lithium nickel-cobalt-manganese oxide (NMC). Such batteries are expensive because of the high cost of lithium resources and also the high cost of cobalt. Lithium is scarce and the dominant forms of its production can be from brine (led by South American countries such as Chile) or mined from minerals where Australia is the leading producer. Such scarcity means that the supply of lithium will always be an issue, especially as demand increases.

Chinese company Tianqi Lithium recently became the second-largest shareholder in Chilean mining company SQM by investing $4 billion, effectively giving it control over nearly half of the global production of lithium. This is up from 20% just a decade ago. In the same period, the Japanese share of the lithium–ion battery market has fallen from around 67% to 26%.

Around 94% of the world’s cobalt production occurs simply as a by-product of other minerals’ production. The world’s primary cobalt reserves are located in the geopolitically sensitive Democratic Republic of Congo in mines, which is also increasingly owned by China. Add to this the Chinese control of the refinement of lithium-ion cathode minerals and its status as the leading supplier of the graphite anode and electrolyte.

This means China controls a large part of the supply chain, so even if India was able to make a step-change in promoting indigenous lithium–ion cell manufacturing, the country would still be dependent on Beijing.

This poses an important geopolitical challenge for India. Despite Prime Minister Narendra Modi targeting India’s oil dependence reduction to 67% by 2022, the figure has increased each year since he has been in power, reaching 84% today. This dependency will not change any time soon.

As the EV market grows, India will additionally be reliant on China for lithium that some of the rest of its energy needs. Given how instrumental that import-led, oil-price inflation in 2013-14 was in sweeping Modi to power, subjecting India to a continued oil dependence on the Middle East and adding another dependency on China may not be in the country’s best interests. Just a few weeks ago, India’s last-minute withdrawal from the Regional Comprehensive Economic Partnership (RCEP) showed how jittery Delhi already is of China’s hegemony in regional trade.

Luckily, there are other alternatives to lithium, but they are not part of the EV discourse in India currently. There are a number of reasons for this: the relative maturity of lithium–ion batteries in the market, a lack of knowledge of alternatives and the lack of global capacity for other types of batteries.

India should look at sodium–ion batteries more seriously. They work just like lithium–ion batteries, just with the lithium compounds swapped with sodium compounds. Sodium is one of the abundant elements on Earth, with vast global reserves of sodium minerals for example from seawater.

Research interest in sodium ion batteries really took off from 2011. Until 2010, there were only 115 scientific papers ever published on such batteries by 2010. In the subsequent nine years, this number grew 50-fold to reach 5,804.

There are just a handful of companies working on this technology. The first to commercialize it, the UK-based Faradion, has filed multiple patents on sodium nickel and manganese-based oxide cathodes that do not contain any cobalt. Manganese and nickel are both abundantly available. The energy density of these sodium ion cathodes has been shown to be almost similar (⁓80%) to that of NMC lithium–ion cathodes.

The reason why China leads the world in lithium-ion cell manufacturing is that aggressive government support for supply-chain clusters by Japan initially in the 1990s followed by South Korea and China created a market dominance. Sodium ion’s level of technological maturity has been achieved in just the last eight years or so and is now approaching its hockey-stick moment. It now needs the focus of investors and forward-sighted governments to see it as the next big thing after lithium-ion. In a few years, the energy densities of such batteries commercially will be comparable to lithium-ion batteries.

For India’s public policy push to grow the EV market without an outright dependence on, or competition with, China for large parts of its supply chain, this presents a big opportunity. Just as India decided in 1958 to champion thorium over uranium in furthering its nuclear research capabilities, the country could become the world’s hotbed for sodium ion battery manufacturing, supporting the existing FAME II EV subsidy scheme. This would make a great case study for Modi’s “Make in India” Initiative.