India is missing a huge export opportunity in education 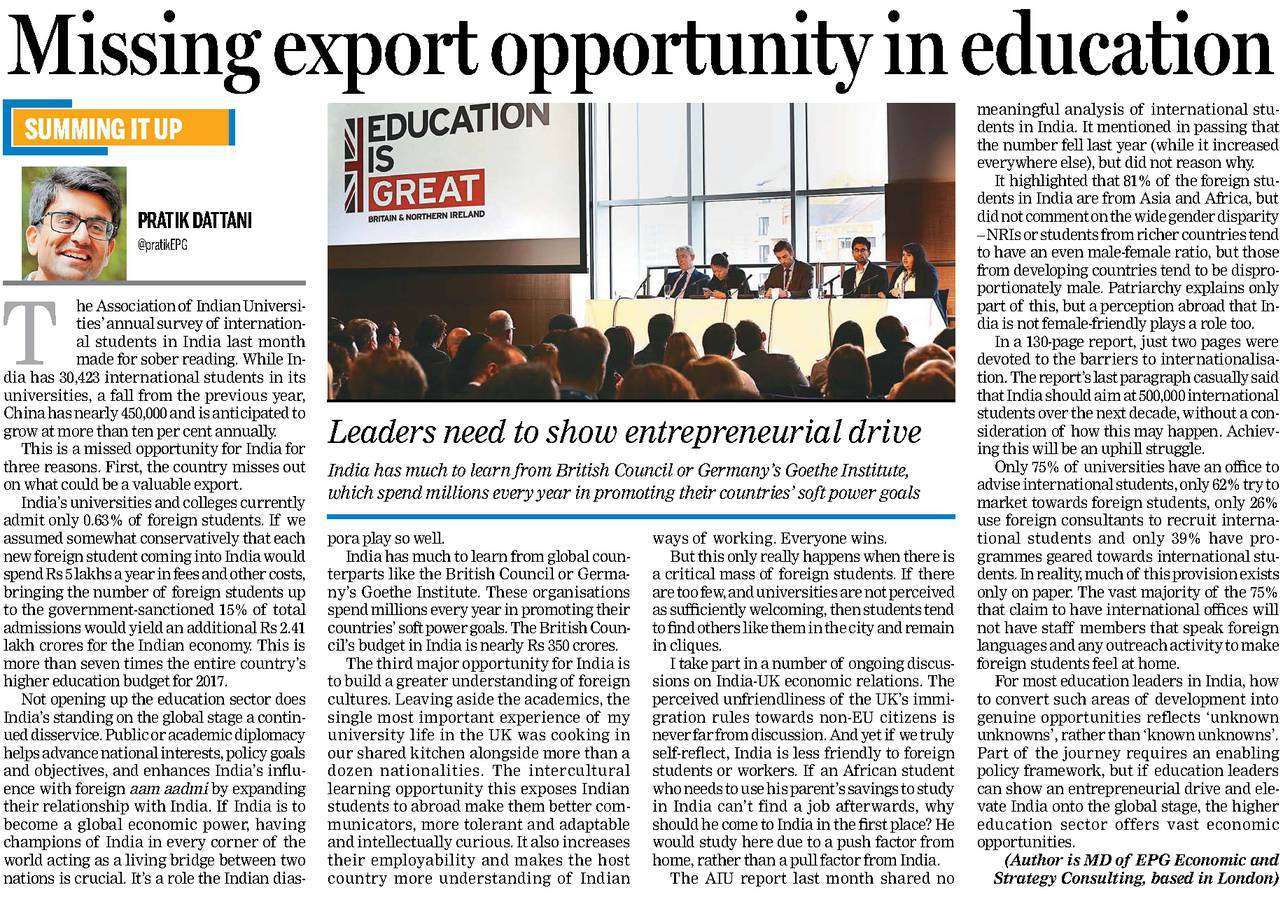 This is a missed opportunity for India for three reasons. First, the country misses out on what could be a valuable export.

India’s universities and colleges currently admit only 0.63% of foreign students. If we assumed somewhat conservatively that each new foreign student coming into India would spend Rs 5 lakhs a year in fees, accommodation and other costs, bringing the number of foreign students up to the government-sanctioned 15% of total admissions would yield an additional Rs 2.41 lakh crores for the Indian economy. This is more than seven times the entire country’s higher education budget for 2017.

Not opening up the education sector does India’s standing on the global stage a continued disservice. Public or academic diplomacy helps advance national interests, policy goals and objectives, and enhances India’s influence with foreign aam aadmi by expanding their relationship with India. If India is to become a global economic power, having champions of India in every corner of the world acting as a living bridge between two nations is crucial. It’s a role the Indian diaspora play so well.

India has much to learn from global counterparts like the British Council or Germany’s Goethe Institute. These organisations spent millions every year in promoting their countries’ soft power goals. The British Council’s budget in India is nearly Rs 350 crores.

The third major opportunity for India is to build a greater understanding of foreign cultures. Leaving aside the academics, the single most important experience of my university life in the UK was cooking in our shared kitchen alongside more than a dozen nationalities. The intercultural learning opportunity this exposes Indian students to abroad make them better communicators, more tolerant and adaptable and intellectually curious. It also increases their employability and makes the host country more understanding of Indian ways of working. Everyone wins.

But this only really happens when there is a critical mass of foreign students. If there are a too few, and universities are not perceived as sufficiently welcoming, then students tend to find others like them in the city and remain in cliques. This leads to home-sickness and a lack of integration.

I take part in a number of ongoing discussions on India-UK economic relations. The perceived unfriendliness of the UK’s immigration rules towards non-EU citizens is never far from discussion. And yet if we truly self-reflect, India is less friendly to foreign students or workers. If an African student who needs to use his parent’s savings to study in India can’t find a job afterwards, why should he come to India in the first place? He would study here because of a push factor from home, rather than a pull factor from India.

The AIU report last month shared no any meaningful analysis of international students in India. It mentioned in passing that the number fell in the last year (while it increased everywhere else), but did not reason why.

It highlighted that 81% of the foreign students in India are from Asia and Africa, but did not comment on the wide gender disparity – NRIs or students from richer countries tend to have an even male-female ratio, but those from developing countries tend to be disproportionately male. Patriarchy explains only part of this, but a perception abroad that India is not female-friendly plays a role too.

The report noted the only meaningful proportion of foreign doctoral students in India is from Africa, but did not mention that the lack of focus on research in Indian institutions drives others away from once they have completed their first degrees.

In a 130-page report, just two pages were devoted to the barriers to internationalisation. The very last paragraph of the report casually said that India should aim at 500,000 international students over the next decade, without a consideration of how this may happen.

In reality, much of this provision exists only on paper. The vast majority of the 75% that claim to have international offices will not have staff members that speak the relevant foreign languages, have formal intercultural training, dedicated pastoral care for foreign students and any active outreach activity to make foreign students feel like they are in a home away from home.