What Indian startup ecosystems can learn from abroad 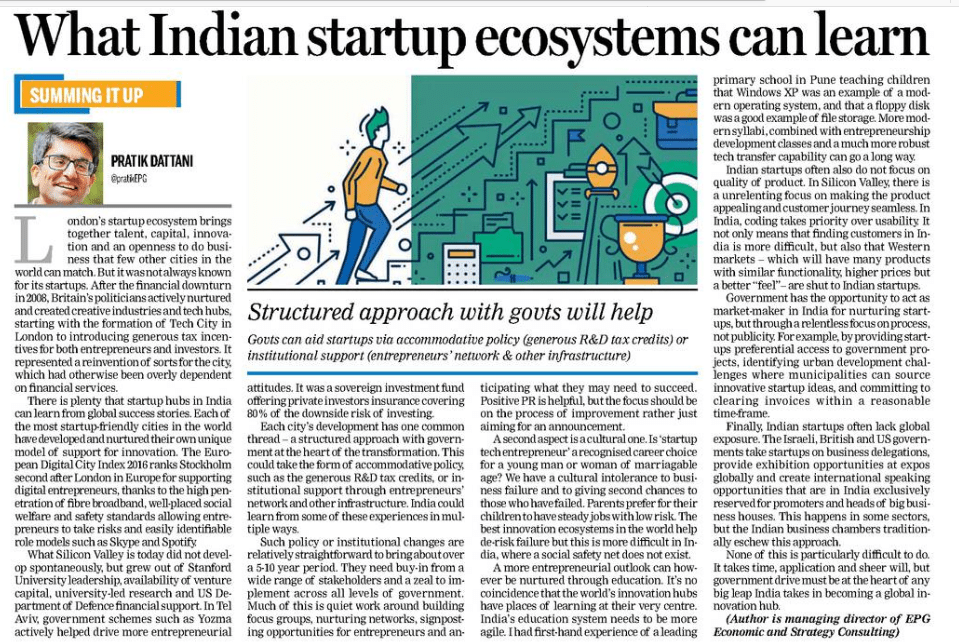 London’s startup ecosystem brings together talent, capital, innovation and an openness to do business that few other cities in the world can match. But it was not always known for its startups. After the financial downturn in 2008, Britain’s politicians actively nurtured and created creative industries and tech hubs, starting with the formation of Tech City in London to introducing generous tax incentives for both entrepreneurs and investors. It represented a reinvention of sorts for the city, which had otherwise been overly dependent on financial services.

There is plenty that startup hubs in India can learn from such global success stories.

Each of the most startup-friendly cities in the world have developed and nurtured their own unique model of support for innovation. The European Digital City Index 2016 ranks Stockholm second after London in Europe for supporting digital entrepreneurs, thanks to the high penetration of fibre broadband, well-placed social welfare and safety standards allowing entrepreneurs to take risks and easily identifiable role models such as Skype and Spotify.

What Silicon Valley is today did not develop spontaneously, but grew out of Stanford University leadership, availability of venture capital, university-led research and US Department of Defence financial support. In Tel Aviv, government schemes such as Yozma actively helped drive more entrepreneurial attitudes. It was a sovereign investment fund offering private investors insurance covering 80% of the downside risk of investing.

Each city’s development has one common thread – a structured approach with government at the heart of the transformation. This could take the form of accommodative policy, such as the generous R&D tax credits, or institutional support through entrepreneurs’ network and other infrastructure. India could learn from some of these experiences in multiple ways.

Such policy or institutional changes are relatively straightforward to bring about over a 5-10 year period. They need buy-in from a wide range of stakeholders and a zeal to implement across all levels of government. Much of this is quiet work around building focus groups, nurturing networks, signposting opportunities for entrepreneurs and anticipating what they may need to succeed. Positive PR is helpful, but the focus should be on the process of improvement rather just aiming for an announcement.

A second aspect is a cultural one. Is “startup tech entrepreneur” a recognised career choice for a young man or woman of marriage age? We have a cultural intolerance to business failure and to giving someone who has failed once a second chance. Parents prefer for their children to have steady jobs with low risk. The best innovation ecosystems in the world help de-risk failure but this is more difficult in India, where a social safety net does not exist.

A more entrepreneurial outlook can however be nurtured through education. It’s no coincidence that the world’s innovation hubs have places of learning at their very centre. India’s education system needs to be more agile. I had first-hand experience recently of a leading primary school in Pune teaching children that Windows XP was an example of a modern operating system, and that a floppy disk was a good example of file storage. More modern syllabi, combined with entrepreneurship development classes and a much more robust tech transfer capability can go a long way.

Indian startups often also do not focus on quality of product. In Silicon Valley, there is a unrelenting focus on making the product appealing and customer journey seamless. In India, coding takes priority over usability. It not only means that finding customers in India is more difficult, but also that Western markets – which will have many products with similar functionality, higher prices but a better “feel” – are shut to Indian startups.

Government has the opportunity to act as market-maker in India for nurturing startups, but through a relentless focus on process, not publicity. For example, by providing startups preferential access to government projects, identifying urban development challenges where municipalities can source innovative startup ideas, and committing to clearing invoices within a reasonable timeframe.

Finally, Indian startups often lack global exposure. The Israeli, British and US governments take startups on business delegations, provide exhibition opportunities at expos globally and create international speaking opportunities that are in India exclusively reserved for promoters and heads of big business houses. This happens in some sectors, but the Indian business chambers traditionally eschew this approach.

None of this is particularly difficult to do. It takes time, application and sheer will, but government drive must be at the heart of any big leap India takes in becoming a global innovation hub.

This article first appeared in DB Post. You can read our report on Developing A Startup Ecosystem, in association with FICCI here or the press release on the FICCI website here.