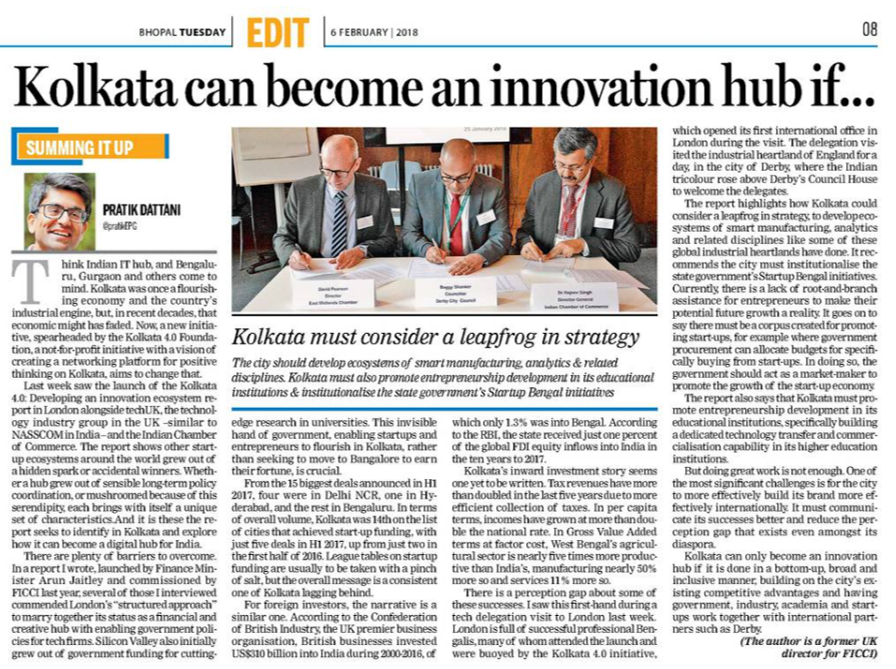 Think Indian IT hub and Bengaluru, Gurgaon and others come to mind. Kolkata was once a flourishing economy and the country’s industrial engine, but in recent decades, that economic might has faded. Now a new initiative, spearheaded by the Kolkata 4.0 Foundation, a not-for-profit initiative with a vision to create a networking platform for positive thinking on Kolkata, aims to change that.

Last week saw the launch of the Kolkata 4.0: Developing an innovation ecosystem report in London alongside techUK, the technology industry group in the UK – similar to NASSCOM in India – and the Indian Chamber of Commerce. The report shows other startup ecosystems around the world grew out of a hidden spark or accidental winners. Whether a hub grew out of sensible long-term policy coordination, or mushroomed because of this serendipity, each brings with itself a unique set of characteristics. And it is these the report seeks to identify in Kolkata and explore how it can become a digital hub for India.

There are plenty of barriers to overcome. In a report I wrote, launched by Finance Minister Arun Jaitley and commissioned by FICCI last year, several of those I interviewed commended London’s “structured approach” to marry together its status as a financial and creative hub with enabling government policies for tech firms. Silicon Valley also initially grew out of government funding for cutting-edge research in universities. This invisible hand of government, enabling startups and entrepreneurs to flourish in Kolkata, rather than seeking to move to Bangalore to earn their fortune, is crucial.

From the 15 biggest deals announced in H1 2017, four were in Delhi NCR, one in Hyderabad, and the rest in Bengaluru. In terms of overall volume, Kolkata was 14th on the list of cities that achieved start-up funding, with just five deals in H1 2017, up from just two in the first half of 2016. League tables on startup funding are usually to be taken with a pinch of salt, but the overall message is a consistent one of Kolkata lagging behind.

For foreign investors, the narrative is a similar one. According to the Confederation of British Industry, the UK premier business organisation, British businesses invested US$310 billion into India during 2000-2016, of which only 1.3% was into West Bengal. According to the Reserve Bank of India, the state received just one percent of the global FDI equity inflows into India in the ten years to 2017.

Kolkata’s inward investment story seems one yet to be written. Tax revenues have more than doubled in the last five years due to more efficient collection of taxes. In per capita terms, incomes have grown at more than double the national rate. In Gross Value Added terms at factor cost, West Bengal’s agricultural sector is nearly five times more productive than India’s, manufacturing nearly 50% more so and services 11% more so.

There is a perception gap about some of these successes. I saw this first-hand during a tech delegation visit to London last week. London is full of successful professional Bengalis, many of whom attended the launch and were buoyed by the Kolkata 4.0 initiative, which opened its first international office in London during the visit.

The delegation visited the industrial heartland of England for a day, in the city of Derby, where the Indian tricolour rose above Derby’s Council House to welcome the delegates. Derby is a wonderful case study for Kolkata of what can be achieved with sensible long-term planning. It has undergone a transition from old industry to new engineering prowess and an economy built on innovation and reskilling of its workforce. Derby City Council, the East Midlands Chamber of Commerce and the ICC signed an MoU to assist ten companies from their respective region to enter the other’s market.

The report highlights how Kolkata could consider a leapfrog in strategy, to develop ecosystems of smart manufacturing, analytics and related disciplines like some of these global industrial heartlands have done.

It recommends that the city must institutionalise the state government’s Startup Bengal initiatives. Currently, there is a lack of root-and-branch assistance for entrepreneurs to make their potential future growth a reality. It goes on to say there must be a corpus created for promoting start-ups, for example where government procurement can allocate budgets for specifically buying from start-ups. In doing so, the government should act as a market-maker to promote the growth of the start-up economy.

The report also says that Kolkata must promote entrepreneurship development in its educational institutions, specifically building a dedicated technology transfer and commercialisation capability in its higher education institutions.

But doing great work is not enough. One of the most significant challenges is for the city to more effectively build its brand more effectively internationally. It must communicate its successes better and reduce the perception gap that exists even amongst its diaspora.

Kolkata can only become an innovation hub if it is done in a bottom-up, broad and inclusive manner, building on the city’s existing competitive advantages and having government, industry, academia and startups work together with international partners such as Derby.