The future of the world stands at a crossroads. The global pandemic of Coronavirus has sent shock waves, not only across every sector, including Universities and Colleges, but also across the world. In order to analyse the ongoing turmoil, we need to look more carefully – with a broad lens – to find out what exactly is happening, why it is happening and what could be the way out to overcome the challenges we face.

Acute crises demand drastic measures. Responsibilities of citizens deepen as each one of us is needed for enhancing civic engagement, expressing solidarity and igniting hope for better collective futures. Therefore, the time demands not only the lenses of Einstein, Newton and Hawkins but also of Socrates, Gandhi and Aurobindo. When the pressing concern for everyone seems to be ‘what will happen next?’  –  only hope, love and wisdom can sustain and move life. In the continuum of life and death, the meaning of the lives of human beings exists.

It is here that the role of Liberal Arts education becomes increasingly vital. Liberal Arts education doesn’t intend to create a free person. Rather in the freedom that Liberal Arts education espouses and advances, lies the vested responsibility for each of us to think imaginatively, connect to others, and question the various aspects of life. It is not the kind of education that sets out to provide voyaging through other peoples’ suffering, rather a training in liberal arts intends to seek questions and nurture human values.

With the advent of neoliberal policies, the focus of higher education has apparently shifted from ‘search for truth’ to ‘honing skills’ Although, there is nothing wrong in honing skills, to do so at the cost of compromising emotions, empathy and critical thinking is seriously flawed, and must be strongly questioned and resisted. Liberal Arts education questions any practice of singularity, and in doing so, emphasizes the interconnectedness of life and tests the knowledge of ignorance. It, therefore, cuts across disciplines, promotes training in broad disciplines and resists the practice of what renowned Indian scholar Avadhesh Singh terms ‘compartmentalization of higher education’. Why else would Plato seek students who could not think geometrically? Here, geometrically means ability to create knowledge of worldliness, which is sadly and for the worse, missing from the existing framework of higher education of many countries.

Compartmentalization of the knowledge system runs the risk of the failure to see the interconnectedness of life and different knowledge traditions. Whereas the integral model of education is more inclusive and rests on the notion that if there is a problem in one’s neighborhood, it could also impact him/her sooner or later. No other example could be so timely as the pandemic of coronavirus to explain this feature of inter-connectedness, that lies at the core of the curriculum of liberal arts education. What started in China has now found itself deeply rooted across the world. All of a sudden, the entire world seems to be united in the battle against the pandemic.  When nations fail, only emotions, empathy and humanism can reunite the world. This type of crisis not only demands sacrifice but also selfless service for others. It takes us back to the notion of ‘Loksangraha’ (well–being of all) advanced in the Gita, which stresses true renunciation not for self, but also for others’ sake.

Liberal Arts education could be best understood through the metaphor of a ‘train’ – a journey of people seated opposite to each other, having opposite views – but all heading towards a destination, a common goal, in case of higher education, inclusive growth of society, the  nation and the world.

Gandhi’s humanism becomes increasingly pertinent here. Gandhi was very fond of Nari Mehta’s bhajan, ‘vasihnav jan to tene kahiye je/ peer parayi jane re’, which means that a true Vaishnavite (it could stand for human being here) is the one who not only knows the pain of others, but also tries to remove this pain. To take another example from a different knowledge tradition, recalling Seneca on the idea of being a human, “while we live, while we are among human beings, let us cultivate our humanity.’

While our love for machines and artificial intelligence has spiked unprecedently, our love for fellow beings (including the non-humans) has registered a significant downfall. Training in liberal arts education can cultivate the hope for human goodness. We are more attached to numbers than feelings. In reality, emotions can neither be expressed through [neither] numbers nor through language, despite the fact that education can only be given through language. Languages can be detrimental and it has been proven repeatedly, particularly the way politicians use it as rhetorical tools to manipulate their voters. Therefore, what is needed is to read through the gaps and silences of the language. The Liberal Arts teach us, among other things, [us] to grasp the emotive power of language as well as its power to communicate – to express the unexpressable  – and to live with the unliveable. It can only be understood through the language of feelings and actions. We live in a world, where everything has been converted into data. Seen from this problematized position, Liberal Arts education plays an important role since it provides intervention by giving a lens to prioritize feelings over numbers. The world can’t be run without numbers; concurrently, it can’t be run without emotions and humanity.

Liberal Arts education provides informational and emotional equilibrium and hence it restores and brings to the centre the aim of knowledge in Indian tradition which is ‘vidya dadati vinyam’ i.e., ‘knowledge gives modesty/humility.

In the present time when the meaning of human life has been reduced to numbers and productivity, a different re-imagination of education and life is required.  Liberal Arts education provides that vision to systematize the provisions. That is why Shashi Tharoor advocates Liberal arts education, since it “teaches you how to think, reason, rationalize, draw conclusions and speak what you believe through words and actions” One could connect this to Socrates’ much celebrated idea that the non-examined life is not worth living.  We are certainly faced with a deep crisis right now, and hence one should consider this as a passage, which is testing our life on the crucible of humanity. Liberal Arts education can certainly provide ways to deal with this pandemic, as Marcus Aurelius famously pointed out, “death smiles at us all, but all a man can do is smile back.” 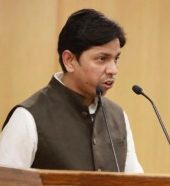 You may also wish to read: Torchlight on girls’ situation in India under the pandemic