Home Publications Contribution of Asian businesses to the London economy

Contribution of Asian businesses to the London economy 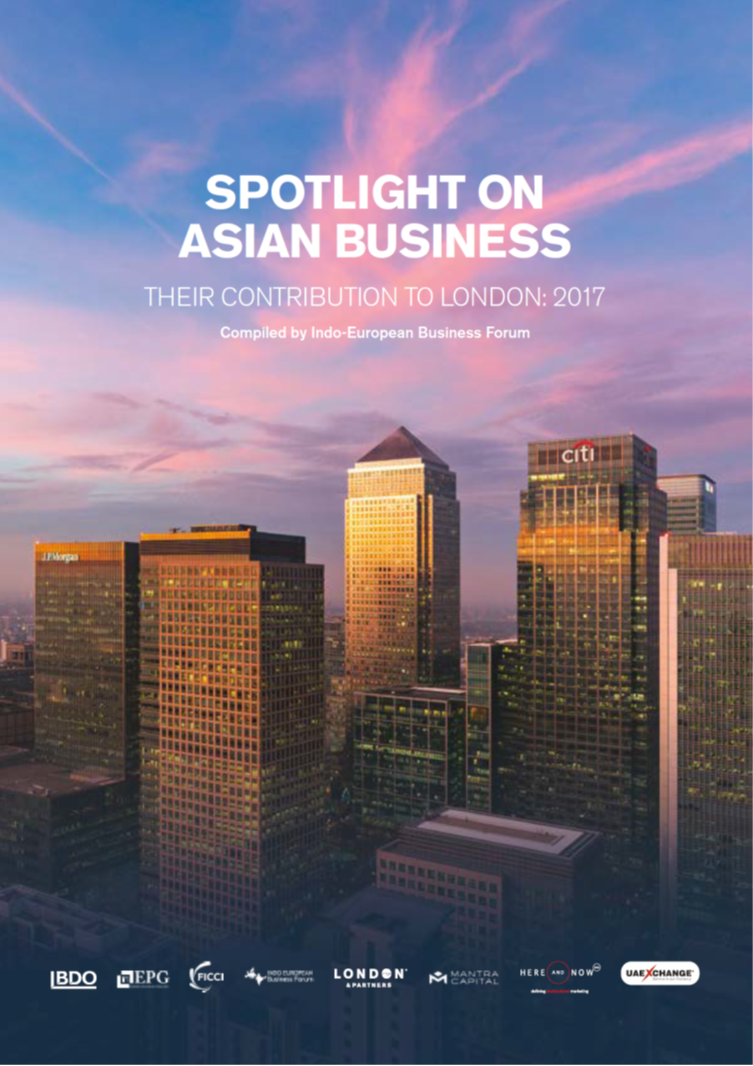 London open for business, the Indo-European Business Forum along with BDO LLP, London & Partners and Mantra Capital supported by partners compiled a report on the growth of Asian businesses in the UK.

South Asian owned businesses have an important impact on London’s economy through their contribution to investment into the capital, jobs and wider society. Highlighting their contribution to the UK economy and strengthening ties between UK and the Indian sub-continent a new report – ‘Spotlight on Asian Business’ has been released at an exclusive event held by FICCI and Indian news channel NDTV 24×7.

Produced by EPG Economic and Strategy Consulting and commissioned by the Indo-European Business Forum this report follows on from the ‘Spotlight on Asian Business – their contribution to London’ study in 2007.

Speaking about the report Chairman of Indo-European Business Forum Mr Vijay Goel said: “This report raises awareness among Asian and British institutions including various trade bodies, providing them information about the scope of investments and business relations among sub-continent and the UK. As chairman of the Indo-European Business Forum, I feel with the advent of Brexit it is important to understand the contribution, growth and success of Asian Businesses in the UK.”

Deputy Mayor for Business, London Mr Rajesh Agrawal said: “I am pleased to introduce this report highlighting the contribution of Asian businesses to London’s economy. It is not more vital than ever that we maintain London’s position as an international business hub, and the continued success and growth of Asian businesses in our great city is part of bringing that story to life.”

Minister of State for Social Justice and Empowerment, Government of India, Mr Vijay Sampla said: “I am pleased to know the Indo-European Business Forum has come up with this report. Our Government will continue to build ever closer engagement with the UK government, so that both our great nations can benefit from the economic and cultural events.”

Talking about the report highlights head of India Advisory Services, BDO LLP Mr Arbinder Chatwal said: “This report is significant in establishing how these businesses have helped bolster the UK capital’s economy, with 265 Indian foreign direct investment projects being set up in London over a period of ten years, accounting for 11% of all London invest projects. It substantiates Asian businesses contribution towards a more balanced economic growth and underscores its importance for sustainable development”

The report surveyed 203 Asian owned businesses based in London, which contribute nearly 15,000 jobs and generate £2.7 billion in turnover. Some of the key highlights of the report are:

Talking about the report highlights head of India Advisory Services, BDO LLP Mr Arbinder Chatwal said: “This report is significant in establishing how these businesses have helped bolster the UK capitals economy with 265 Indian foreign direct investment projects being set up in London over the period of ten years accounting for 11% of all London invest projects. It substantiates Asian businesses contribution towards a more balanced economic growth.”

Secretary-General FICCI Dr A Didar Singh said: “This report clearly articulates the strong economic contribution Indian immigrants have made to the London economy. Their contribution has increased over the last decade and this report represents the views of businesses which contributed nearly £2.7billion in turnover.”

Thus, this report has shown that not only are Asians continuing to expand their family’s business presence using London as a base but new waves of Asian businesses are being created and established in the city and is likely to grow in the coming years.